No Platform for Nazis!

NO PLATFORM FOR NAZIS!

The recent appearance of BNP leader, Nick Griffin, has generated much discussion over the question of his right to a platform on the BBC and, more generally, over the issue of free speech for fascists. For me this is an old question about which I made up my mind in the course of the struggle against the National Front in the seventies. At that time we, Anti- Nazi League supporters and the left generally argued the case for no platform in every student union and trade union we could and pretty much won the argument throughout the labour and student movement. Today there is a new generation of fascists (the BNP, EDL etc) and anti- fascists and we need to have, and win, the argument again. This is my contribution.

The first reason for refusing Nick Griffin and other BNPers a platform on the BBC and elsewhere in public life is simply that they are NAZIS. I am not opposed to giving them a platform because I don’t agree with them or don’t like them. I don’t agree with (and actively dislike) Tories, and indeed Blairites, but I don’t want to no platform them. Its because they are NAZIS i.e. fascist followers of Adolf Hitler. Some people don’t realise this because it has long been Nick Griffin’s strategy to present the BNP as just British Patriots, but in fact Griffin and other BNP leaders, like fellow Euro MP Andrew Brons, are long standing hard core Nazis who go back to John Tyndall, the NF and Oswald Mosley of the British Union of Fascists (Hitler’s main supporter in Britain). Moreover Griffin is surrounded by hardcore Nazi thugs, like Tony Lecomber, with numerous convictions for racist violence and terrorism. 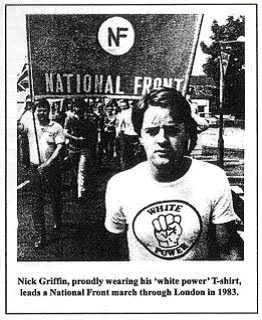 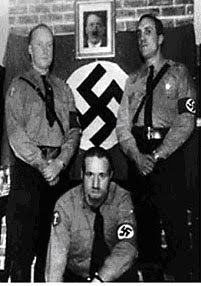 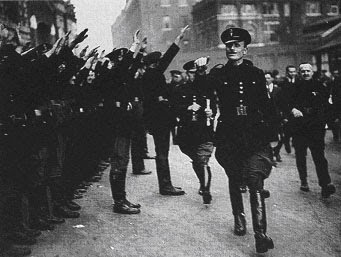 Oswald Mosley in the 30s 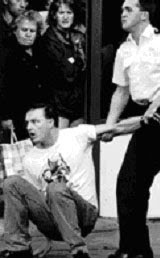 Some people who know the BNP are Nazis don’t realise what this means. Nazis are not just people with unpleasant views. They are a political movement bent on winning power with the aim of destroying democracy (and freedom of speech), destroying the labour movement (who are all ‘Communists’ in their eyes) and driving out, by intimidation and force, non- white ethnic minorities. Whatever Griffin may say in public, the BNP aim of achieving a white only, non- multicultural Britain could ONLY be achieved by smashing the trade unions and socialist organisations and violent intimidation and persecution of people of colour, and Griffin knows this.

The second main reason for not giving the BNP a platform is that we are not just talking about words here. Every time and everywhere the BNP gets a foothold or an airing of its views there is an increase in racist violence and attacks. This is what happened in SE London when the BNP had its headquarters in Welling, culminating in the racist murder of Steven Lawrence. Its what happened with former BNP member, David Copeland , the nail bomber who bombed Brixton, Brick Lane and Soho. Griffin will not go on TV and openly urge violence but that’s what his thug sympathisers on the street will hear and act on.

Stopping the BNP (and other fascists) from growing and building influence, including by stopping their marches, and denying them public platforms is therefore both a political duty, a necessary act of solidarity with all vulnerable minorities AND, for everyone of colour, LGBT people, Jews, Muslims, trade unionists, socialists etc a matter of self preservation. To put it personally, if the BNP were in power I, and people like me, would be in prison at best and most likely dead. In a town or community where they were dominant I and people like me would not be safe to walk the streets. Anyone who doubts this should check the historical record and see what the fascists did to Rosa Luxemburg and Karl Liebknecht in Germany, to Antonio Gramsci in Italy, to Andreu Nin in Spain and to hundreds of thousands of rank and file socialists across Europe, long before they started on the Holocaust.

Some Common, but Mistaken, Arguments for giving the BNP a Platform

1. Put Griffin on TV, he’ll only make a fool of himself. Griffin was bad on Question Time, but the publicity he received enabled the BNP to get 3000 enquiries for membership. Every time Griffin or other BNP leaders get these platforms they get more publicity, become more accepted as part of the ‘mainstream’ and gain support.
2. The way to defeat the BNP is by rational argument. Rational argument will work for some people (mostly people who wouldn’t join or vote BNP anyway) but it will not work for many of those the BNP is trying to attract. The BNP’s essential appeal is not rational but emotive. Their appeal is to bigotry and hatred, to people who are fearful and want scapegoats and ‘strong leadership’. Gaining public platforms, such as on the BBC, increases that appearance of strength, as does successfully marching in the streets. Denying them a platform and driving them off our streets shatters that image of strength. The ‘master race’ doesn’t look very masterful when it is forced to flee with its tail between its legs.
3. The BNP are not Nazis because they British not German. This is an argument based on historical ignorance. The German Nazis are the best known example of fascism, but fascism was and is an international phenomenon and movement, which took power in Italy, Austria, Spain, Portugal, Rumania, Japan and elsewhere, and struggled for power in other countries including France and Britain. Today there are neo-nazi movements across Europe including in Russia and outside Europe, in the USA and India.
4. The British people have too much sense to be won over by the BNP. This argument can seem plausible and hard to answer without attacking ‘the British people’ but it is wrong on a number of grounds. Try out, for example, ‘The British people have too much sense to vote for Margaret Thatcher’. Or ‘The British people have too much sense to interested in trashy nonsense like Big Brother or I’m a Celebrity- Get me Out of Here.’ It is not true that the British have some special gene of common sense, unlike Germans, Italians etc , which makes them immune to fascism. What stopped Mosley in the thirties was not ‘British’ common sense but anti-fascist militancy at the Battle of Cable St. and elsewhere. Also the BNP does not have to win over all, or even most, of the British people (and the same applies to fascist movements in other countries). The fascists in Germany, Italy, Spain etc did not gain power by winning majority support but by being put in power in situations of extreme economic or political crisis by the ruling class of those countries in order to smash the left and the workers movement. For that they did not need to achieve a majority only a credible sixe and strength. This can certainly be achieved by the BNP in the future IF we let them.
5. Freedom of speech is an absolute principle, which must be granted even to Nazis. No, it is not an ABSOLUTE principle in this or any other society and cannot be. I do not have an absolute, or any kind, of right to turn up at the BBC and be allowed to speak on Question Time or any other programme, I have to be invited and so does Nick Griffin. Even elected MPs cant demand the right to be on TV, much as they’d like to. Try exercising absolute freedom of speech at the Tory Party Conference or the Labour Party Conference (remember Walter Wolfgang who shouted ‘Rubbish!’ at Jack Straw and was manhandled out by heavies.) Try exercising any kind of freedom of speech in a court of law when the judge tells you not to and you will end up in jail for contempt. In fact there thousands of such restrictions on freedom of speech, in the armed forces, in many jobs, on schools, in the police, and so on. You do not have, and should not have, a right to stand in the street and yell racist abuse at people (indeed you can be arrested for behaviour likely to cause a breach of the peace for a lot less than this). Yet, although the BNP may choose its words carefully this is essentially what the BNP does. They should be stopped before they get too strong for them to be stopped.

What all the above arguments have in common is that they treat the struggle against fascism as if it were some kind of reasoned debate with victory going to the side that presents the most logical arguments ( ‘Now is mass unemployment in Germany really caused by the Jews ? Let’s examine the evidence’) It is not. History shows that it is a social and political struggle ( an aspect of the class struggle) which if the fascists get strong enough will culminate in civil and world war. Defeating Hitler cost 50 million lives. I say ‘ Never Again! Stop them now – by any means necessary !’

Jordan Kasteler is a seasoned professional and an SEO consultant specializing in Search Engine Optimization (SEO), Social Media Marketing, and all aspects of Internet Marketing.

To learn more about him, you can visit his site at : http://www.jordankasteler.com/utah-seo-pro-blog/

I'm starting a new Libertarian Socialist blog called Rosa's Ghost. I
was hoping you might add it to your links page. It would be a great
help. Thanks in advance.

The problem here is that the BNP are not fascists (there are fascist groups in the UK but they aren't one of them). Fascism was an historically specific response to the economic crisis of the 1930s and is of relatively little value to the bourgeoisie today.

Griffin and his crew are bogeymen and I fear that you are playing into the hands of the state here. You'd be much better spending your time campaigning against the real racists in parliament (Straw et al).

Agree with that last comment. But the SWP are never going to attack the democratic racists, since they actually support Labour - 'critically', of course :-)

For example, true to form, they're calling on workers to vote for Labour rather than the Tories at the forthcoming general election.

The BNP are in fact fascists. They pretend not to be, because Hitler-style fascism isn't a big vote-winner for obvious historical reasons.

Fascism is of immense "value to the bourgeoisie today", because a growing racist party puts far-right pressure on mainstream politics.

If a disillusioned electorate is to abandon the mainstream parties, better from the bourgeoisie's point of view that it goes to the right than the extreme left to support (horror!) socialism.

I agree with you on every detail and point mentioned above - thanks a lot for such an article. The best writing service can be opted as the best academic solution ever!