THE REAL VAN GOGH : The Artist and his Letters

The Royal Academy of Arts, Picadilly, London
Until April 18 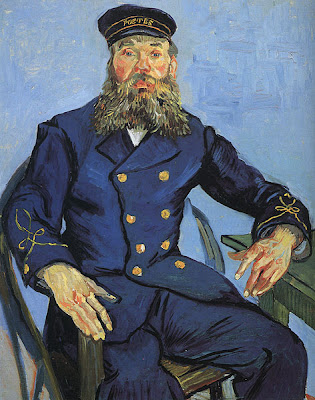 This exhibition comprising 65 paintings and 30 drawings offers a brilliant opportunity to see some of Van Gogh’s finest works and a fair representation of his whole artistic development, in contrast to the four or five pictures normally on view in the National Gallery.

Van Gogh is an artist who especially needs to be seen in the original. It is necessary both to stand up close and see the individual brush strokes and three dimensional texture and step back and see the overall effect.

Van Gogh’s art is distinguished by two main characteristics: its communication of an extraordinarily intense engagement with everyday life – with people, nature and material objects, and its radical democratic subject matter.

The democratisation of the subjects of art, from classical mythology and portraits of the aristocracy to the everyday has been one of the central themes of modern art. It stretches from Courbet’s The Stone Breakers, through Seurat’s Bathers and Duchamp’s ready mades to Andre’s Bricks and Emin’s My Bed. In Van Gogh it is there from the start in his wonderful studies of peasants and weavers in 1884-5 and continues down to his magnificent painting of his simple wooden chair.

The intense engagement is also there from the beginning of his career – a feature of his personality – but his ability to express it explodes with his discovery of vibrant colour in Provence in 1888. This results in works like The Cypresses, The Starry Night, and his fierce self portraits; works which make him the founder and greatest exponent of the expressionist tradition, which runs through Munch, Kahlo, Rothko, Bacon and Emin.

Moreover in Van Gogh these two characteristics are fused. He paints Postman Joseph Roulin and his family, and his own shoes, with the same intensity as he paints himself and the mountains. Prior to Van Gogh, I know of no artist who painted either their local postman or their boots. Van Gogh painted both again and again.

This raise the much debated question of Van Gogh’s ‘madness’. Was he mad or a misunderstood outsider? Did he make his art because of or despite illness? These issues cannot be settled here but we can say that living in capitalist society with the level of passionate engagement and fierce ascetic integrity that he brought both to his early missionary work and to his art was bound to be near impossible. Hopefully it could be easier under socialism.

It also means that Van Gogh stands in particularly sharp contradiction to the combination of aristocratic privilege and bourgeois profiteering, that dominates the art world and now promotes, trades in and makes a buck off his work.

This show is billed as The Real Van Gogh and its selling point is that it features the paintings in conjunction with appropriate letters, mostly to his brother Theo. In this there is a small element of truth and a large dollop of hype. It is true the letters are important documents which prove, if proof is needed, that Van Gogh was a deadly serious and knowledgeable artist, not the the wild mad spontaneous genius of the Hollywood biopic, Lust for Life. But the letters are not a new discovery, just a new edition, and they add little to the exhibition. They certainly don’t give us the ‘real’ Van Gogh.

There are some wonderfulpictures here from the early Weaver to The Yellow House and the Mountains at Saint Remy but they are sixty five paintings out of over 800 (seventy in the last seventy days of his life!) and this show is no more the ‘real’ Van Gogh than would be one containing The Starry Night, The Sunflowers, The Night Café and Wheatfield with Crows, which this does not.

Finally, the exhibition press pack specifically requests we credit the sponsorship of BNY (Bank of New York) Mellon. I thought Socialist Worker readers would want to know this.